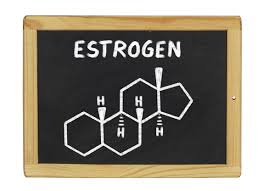 Estrogen dominance is a phrase first used by Dr John Lee, who coined it to describe the collection of symptoms that occur in women when the action of this ‘female hormone’ becomes excessive. Although this term is denigrated by some relics of modern medicine, estrogen dominance can be determined easily via blood testing. And it is occurring more often. Estrogenic chemicals in the environment, disruptions in digestive bacteria and stress-induced depletion of progesterone are all linked to this rise.

I have selected the two case studies below because they illustrate well how excessive estrogen can cause different symptoms from one woman to the next. Equally, these symptoms can be caused by imbalances other than estrogen issues. And, through the interactions of progesterone, it is

Example A. Miss H, 38-year-old woman, came to see me in 2013. She had noticed weight gain around 6 years ago, having just moved into London for a new job (as it often does, this coincided with an increase in working hours and an increase in ready meals and poor quality snacks).

After a year, she decided to address the work/life balance. She changed jobs and began to address her diet and fitness. She lost all the weight in her upper body, but it would not budge around her hips. She reported that she had always had a tendency to store ‘some’ weight there, but never in such an obvious way. After years of trying to deal with the problem through ‘spot reduction’ (which involves useless exercises that aim to burn fat in specific areas), she came to see me. During her initial consultation, we discussed a number of symptoms that indicated high estrogen: greasy skin and acne, bloating and PMT before her period, feeling irritable, poor quality sleep, painful/swollen breasts. Many females in her family had experienced endometriosis, an estrogen-linked condition.

It was noteworthy that she also suffered from digestive problems, with bloating and gas a daily occurrence. She also suffered from brain fog and dry skin, noticed her stools varying from constipated to loose and the consumption of carbohydrates always gave her a brief buzz of energy followed by a slump. These are all classic signs of dysbiosis (often erroneously called candida), and all of which came on shortly after moving to London.

I ran a test for steroid hormones, which she took on Day 21 of her cycle. The results were: 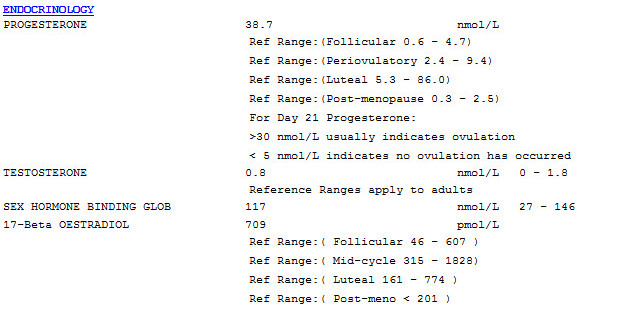 It was clear that high-estrogen was at the heart of her symptoms, but I didn’t believe that she was genetically inclined to over-produce estrogen; after all, the signs of excessive estrogen were absent for the first 32 years of her life. Additionally, dysbiosis often caused a huge rise in an enzyme called beta-glucoronidase, which increases estrogen reabsorption from the intestines. With this in mind, I suggested that Miss H introduce an anti-microbial protocol; this involves a low-carbohydrate diet to weaken any dysbiotic species in the intestines, anti-microbials to kill them off and potent probiotics to to replace them. After an initially week of disruption, she noticed huge improvements in digestive function although no difference in the fat storage around her thighs.

After 3 weeks on this protocol, we then added DIM (an natural agent that increases the elimination of estrogen) and this appeared to make a small positive difference. The next step was addressing Iodine status. Iodine is a halogen element that supports thyroid function and detoxification, while also providing an anti-oxidant and anti-microbial effect. Crucially, it has a powerful estrogen-balancing effect. We ran an Iodine Loading test, which showed she was very short of iodine (12% clearance of the loading dose, instead of the optimal 90% plus). I suggested that she add Lugol’s Iodine at 2 drops per day and the results were striking. Miss H felt better from the first day of introducing iodine, and was buying jeans and work trousers in a smaller size ten days later.

Miss H is now feeling ‘strong and healthy’ and her lower half has dropped from a size 14 to a size 10, which is in keeping with her proportions. She does not suffer from digestive issues or any of the estrogen-linked symptoms listed above. In the coming weeks, we are due to retest her iodine status after almost 4 months of iodine replenishment.

Example B. Miss V came to see me in 2012 after a year of increasing symptoms. After a stressful relationship break-up, she found herself going out more often and staying out later. She noticed that, while some workfriends would be bright as a button the day after a midweek session, she was ‘on the floor’. She remembered being able to do just fine on minimum sleep as a teenager ans so she put it down to age, although I pointed out that 29 years old is actually young. As months went by, her energy levels became progressively worse and other symptoms developed. These included increased anxiety, disturbed sleep, regular colds, salt cravings, low blood pressure and dizziness, difficulty holding onto fluids, difficulty handling stress, difficulty losing weight, low mood and irritability and digestive disturbances.

The symptoms were classic signs of adrenal imbalance, which can often trigger estrogen issues or be made worse by them. What was interesting is that there were few ‘classic’ signs of estrogen dominance – while estrogen does cause many of the symptoms above, it bears little relation with others and some of the expected signs (fat storage around the hips aka “pear-shape”, greasy skin) were not there.

However, although her blood pressure, salt cravings, fluid retention and colds were now improved, she had not shown the full improvements I would have expected and still found it difficult to get to sleep (which therefore ensured energy levels remained low) also continued to feel irritable with friends and family. She felt particularly bad just before menstruation and experienced painful periods. Time to test steroid hormones.

Her test results were unambiguous. Taken on Day 22 of her cycle, they showed:

Although all the remaining symptoms pointed heavily to estrogen as the culprit, it was actually low progesterone that was at the heart of the problems. Progesterone is required to balance out the actions of estrogen, meaning that the latter can run wild without any competition. Progesterone stores can often be ‘robbed’ as a result of adrenal stress, where the body prioritizes the production of cortisol. The body’s major stress hormone, cortisol is formed on the same enzymatic pathway as progesterone.

Miss V introduced topical Progesterone drops, gradually increasing her intake over the course of two weeks. Once she reached 12mg per day, split between morning and evening, she began to sleep ‘really, really well’. Her moods were also transformed. We dealt with a few minor tweaks afterwards to her mineral levels, but she was feeling consistently great after several months (even after a late night out with work, the acid test). She has since removed the progesterone support altogether and remains in good health.

This was a classic instance of lingering symptoms pointing to estrogen issues, but only when they had been ‘unmasked’ when we dealt with the issues caused by adrenal imbalance. I often look at the adrenal function before taking any steps to support the balance of the sex hormones and, 70% of the time, this will be all that will be required as the most common cause of sex hormone imbalance originates at the adrenals.

Miss V represents a good example of estrogen dominance, which does not include all of the classic external signs and where balancing other systems (in these case, the adrenals) is necessary to fully expose the estrogen issue. This is why a step-by-step which reviews all organ systems and hormone status at each stage always represents the best course of action to support optimal hormone balancen. Certainly, this case goes some way to illustrating how other body systems can impact on symptoms we would traditionally view as estrogen dominance, and vice versa.