Mrs D came to see me in November 2011, after a difficult year. A 45-year-old mum-of four, she had first noticed feeling tired in 2010, especially in the evening. This culminated in a crash in April 2011 after a particularly busy day. This prompted Mrs D to take action and see a doctor.

As is often the case when the adrenals have become compromised, doctors found little wrong with Mrs D when they performed their standard tests (which involved very basic blood tests and an ECG). In fact, the only thing they could identify was iron-deficiency anaemia (Hb was at 8.4, well below the reference range), which seemed tied into excessive menstrual blood loss.

As a consequence, Mrs D was prescribed the progestogen-only coil (Mirina) to reduce the severity of this menstrual loss. This triggered positive improvements in a lot of symptoms, a clear sign that hormonal balance was key to the way she felt. However, estrogen support was added soon after, and Mrs D felt noticeable worse. A month later, in October, she crashed again. This is when we first spoke.

It was clear to me straight away that the adrenals were in need of support. Mrs D noticed pronounced fatigue but experienced a ‘second wind’ in the evening, poor sleep, a strong aversion to background noises (eg TV) and other sensory stimuli, poor appetite in the morning, tachycardia, increased startle reflex, a new preference for salty foods and weight retention around the abdomen. What also caught my attention is that Mrs D had historically suffered from IBS, which I can 100% correlate with an imbalance in intestinal bacteria. The microbial populations here can become disturbed by opportunistic bacteria/yeast whenever the adrenal function drops, because of the influence the adrenals have on the immune system. This is very relevant as, if this imbalance is not addressed, it will place on ongoing stressor on the adrenal glands and block recovery.

We started by focusing on the digestive tract, adding psyllium husks, digestive enzymes and hydrochloric acid, and by providing magnesium in generous amounts. We also increased Mrs D’s protein intake and changed her eating schedule to every 3 hours. The idea here was not to ‘fix’ the intestines at this stage, but to allow full absorption of nutrients to occur. The magnesium was clearly required to help with the high adrenaline symptoms.

Mrs D initially found it difficult to maintain the eating schedule but found that the above changes were sufficient to significantly improve her sleep. She was now sleeping 8 hours a night consistently, and felt much better. Then we got back her adrenal stress index test in December 2011, which showed: 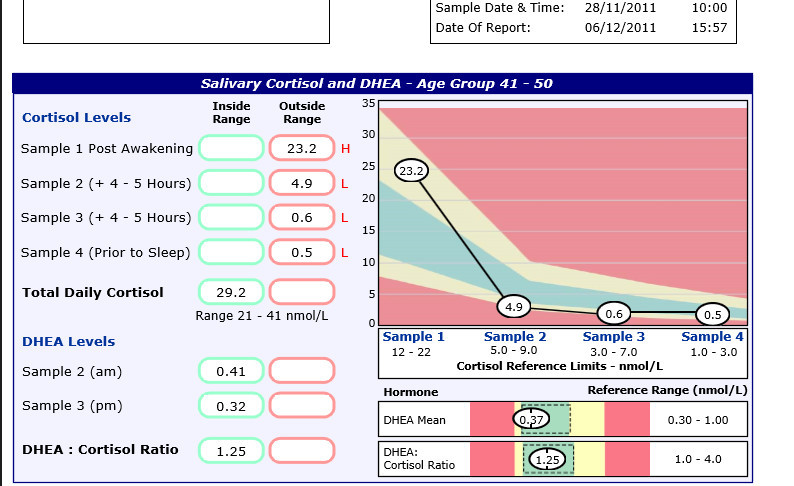 The high cortisol in the morning showed how her body was under stress and sending lots of stimulation to the adrenals. The low cortisol levels that followed showed that the tissues responsible for cortisol production were just not keeping pace, explaining why her body was compensating with such high adrenaline release. Although the DHEA levels were just about within the reference range, the levels should have been higher given the high level of stimulation going their way. We supported the adrenals with Vitamin C, Licorice Root and DHEA.

I next saw Mrs D in May 2012, at which point she has noticed a ‘great improvement’. However, she still felt unwell if she missed her regular meals or had her sleep disturbed by external events. This is typical for many people during recovery, and shows is that the support they are receiving is right for them, but that the adrenals are not yet at the stage whereby they can perfectly adjust and react to higher-stress environments. I ordered another adrenal stress index test, which showed: 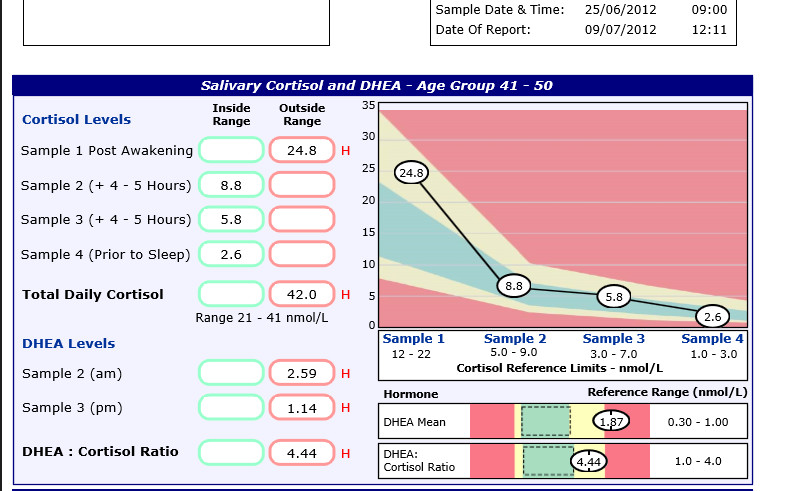 It was clear that both the cortisol response had improved dramatically, although the high levels of cortisol in the morning showed that there was still a high level of stress going to the adrenals. This would prove an obstacle to complete recovery if it was not addressed. At the same time, the DHEA response now appeared optimal, to the point that the small amount of supplementary DHEA was taking levels into the high range. The Licorice Root was reduced and the DHEA was removed.

So followed many months of feeling very good, but with dips induced by external stressors. Mrs D was still handling the stresses and strains of raising teenagers and unpredictable work commitments but found that, as months went by, the dips became less pronounced and she stood up to some significant challenges better and better. We monitored her mineral levels and continued to support the intestinal function, introducing supplementary iodine, and she reached a point we might consider ‘ideal’ in late 2013.

This is worth noting, as Mrs D did experience much higher stress load during her recovery than might be considered typical. However, I think her case serves a good example of the success than can be achieved, even went the situation is not considered ideal. We cannot all move to a Caribbean island until we feel well!