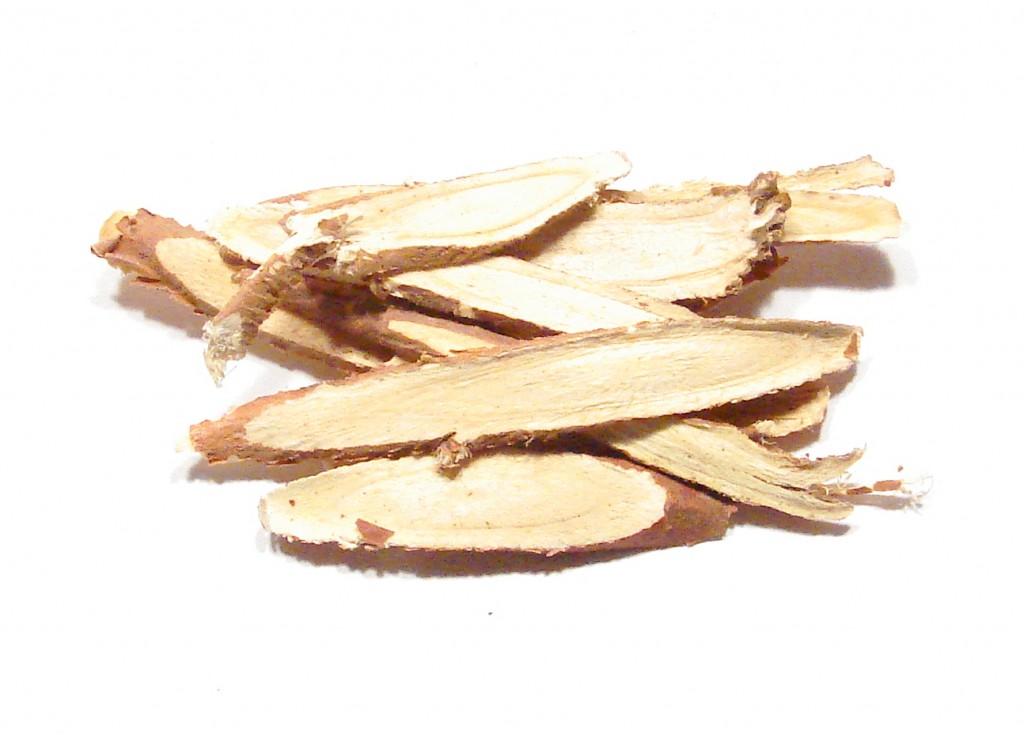 A herb used medicinally for milennia, Licorice remains the go-to herb to support the adrenal glands. Unlike adrenal extracts and adaptogenic herbs, Licorice boosts flagging cortisol levels without stimulating the adrenals in any way, making it ideal to boost energy during the day without ruining sleep at night.

Licorice Root contains glycerrhizinic acid. The active component in the plant, this phytochemical modulates cortisol levels by reducing the actions of a liver enzyme (11-BSD) that would otherwise deactivate the hormone. This actions allows it to reliable increase cortisol levels in the bloodstream without increasing the workload on the adrenal cortex and without shutting down the hypothalamic-pituitary-axis in the way hydrocortisone can. Overall, this represents a simple, safe and effective way to boost cortisol levels (crucial to reduce inflammation, increase circulation, regulate blood sugar levels and blood pressure. Adrenal hormones also affect the thyroid, liver, digestive tract, immune system and directly activate the central nervous system). This is why Licorice remains my first choice whenever I want to support the cortisol levels in an individual.

However, not everyone gets on so well with Licorice. Most people who feel worse after taking it do so because they didn’t have low cortisol levels in the first place; such persons often feel drawn to Licorice after correlating their symptoms with “adrenal fatigue”, courtesy of a good ol’ Google search. However, many individuals (around 30%) have adrenal symptoms without having low levels of cortisol. These individuals instead have low levels of DHEA (a chemical cousin of of the glucocorticoid, one that both works with cortisol in some ways but against it in others). The ratio of cortisol:DHEA should be balanced – people with low DHEA will actually disturb this ratio by trialling Licorice Root, and thus get predictable results. Individuals are likely to feel weaker from the first day of use, increased anxiety, reduced ability to think, and their sleep will suffer (both getting to sleep and staying asleep). This underscores the need to take an Adrenal Stress Index test before intervening in the delicate and complex hormonal playground.

So what about the others, that have confirmed low cortisol on an Adrenal Stress Index test and still feel worse for taking Licorice Root? These individuals are more rare, but most definitely exist. In the last eight years of studying responses to Licorice supplementation, two specific patterns emerge:
- the first pattern is one of “mis-spent cortisol”. For this to occur, the adrenal cortex must be struggling to respond to the stimulation hypothalamus/pituitary AND the sleep/wake cycles must be disturbed. What occurs is that the Licorice Root fortifies the adrenals in a way that permits them to pump out more cortisol (a good thing) but then they go on pumping out the cortisol way into the night. The consequence: the individual in question feels better upon the first day of use and then very relaxed at night-time, noticeably sleepy but unable to cross the threshold into sleep. If this pattenr continues, they become progressively more tired and sleep-deprived. The solution: the sleep-wake cycles need to be reset so that the cortisol is “spent” at the times it is required, and not during the night. Both Phosphatidyl Serine and Melatonin can be useful to achieve this.
- the second pattern is a “paradoxical reaction”. I have discussed this in more depth previously, but this happens due to the conditions in the central nervous system. Due to low stamina in the neurons, the ‘switching on’ effect that occurs in the brain (from the increase in cortisol) proves too much. The brain goes into what I call ‘neural cramp’, the akin to what we would see if we were in a cast for 6 months and then immediately tried to play 90 minutes of football. It’s a case of too much, too soon. The solution: attend to the conditions in the central nervous system, focusing on both the neural circulation and the inflammation in this area, then restore the Licorice at a half-dosage. When done properly, this allows the Licorice to be tolerated and therefore the individual can start feeling the benefit of this herb.

There is a reason Licorice has been a mainstay of Traditional Chinese Medicine for so long. Used appropriately, it is one of the most valuable and effective herbs that I use with patients but, like any item that has a significant impact in the body, it is capable of changing internal conditions and this can sometimes be unpleasant.

The important lesson to take this that the symptoms produced yield valuable information and that we must always consider what these reactions tell us. Of the three reactions outlined above, only one I would truly consider to be a ‘bad’ reaction. The other two are simply responses that highlight a need to adjust the approach and address additional issues (issues that were previously masked due to a lack of cortisol).

Licorice Root is one of the most universally helpful interventions for individuals with low cortisol but, like all effective herbs, it is rarely a case of it being ‘good’ or ‘bad’ for you. Equally, if you write off Licorice as ‘bad for you’, you may be ignoring an important message your body wants you to hear.